SMARANO and THE NON VALLEY

The Non Valley paradoxically is not a valley, but an highland. The most extended valley in Trentino Region is in effect marked by a series of rough amphitheatres which, almost in concentric circles, extended from the lower altitudes to the higher ones, with a landscape characterized by orchards up to alpine vegetation, forests, grasslands and rocks in higher lands. This long and undulated highland engraved by watercourses which have excavated deep fissures (on the deeper one is built the Santa Giustina dam, forming the homonymous lake) is closed at north by the mountainous group “le Maddalene”; at south-west by the “Brenta Dolomites”; at east by the western subgroup of Anaunian mountains; at south by the Paganella Massif and by the Andalo Saddle.
The tips which mark the horizon aren’t much elevated: mountain Luco is 2434 meters; Péller, the mountain that separates the town of Cles from the Sole Valley, is 2320mt; the Macaiòn, which dominates the Adige Valley from Merano to Bolzano is 1866mt; the Roen which has mild versants of forests and grasslands in the Non part and steep cliffs in the Adige slope, is 2116mt. The Paganella is 2124mt high, but the highest peaks are in the Brenta Dolomites Massif: “Cima Falkner” 2999mt, “Pietra Grande” 2937mt and so on. This series of terraces is visually marked by a feeling of sharp light and brightness.
During springtime the valley is a blossoming garden, an immensely rich palette of whites and roses over the dark green of the forests, with snow on the high peaksof this composite picture. In the summertime and fall thousands of irrigation water jets weave a tissue of white lines which covers the calm green of the trees already loaded by fruits. The peculiar climate can explain in part the richness of the valley agriculture, which has impressive fruit depots (the apple is the product that makes the Valley so well known in Italy) that are the symbol of the current economic prosperity. In addition, to understand the soul of this Valley, we must consider two additional features: the Valley is a mountainous land and it is located in the linguistic border of Italy.
The labour in the mountain fields, even in a context of relative welfare (the Non Valley has always been one of the richest in Trentino Region), has formed during the centuries some elements of the spirit of the local people: the ingenuity, the sparingness, the soberness even in talks, the adherence to practices. But next to the family, which is the centre of the system, there’s also the attutude of the village community towerds the cooperation, the social organizations, the municipal administrations. 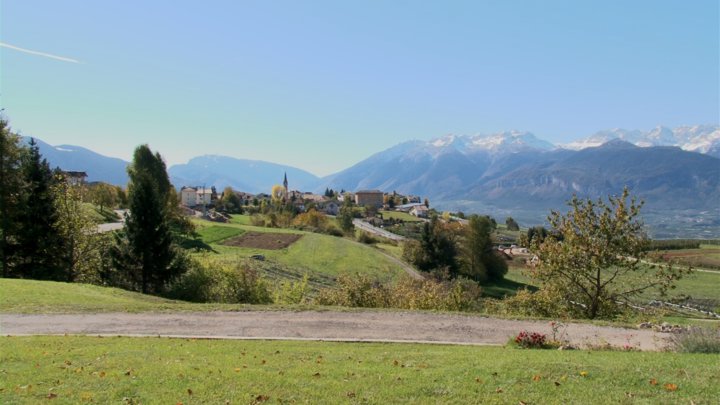 Smarano is a little village in Trentino Region, it currently has 420 inhabitants, it is placed at 1.000 meters a.s.l. in Non Valley, 42 Km. North from Trento, in the northern part of Italy south of the Austrian border. The recent escavation of the Church’s floor revealed clear relics of ancient roman life in the village , alteady certified in the past decades by findings of Roman statues of the second century and many other small objects of the same age: these relics are shown in a small interesting archeologic museum in Sanzeno ( 5 kms from the Village).
The magnificent church, built for the first time in 1284, was renovated in gothic style in 1407 and rebuilt during the years 1759-64 in baroque style, it is one of the most appreciated pieces in the Valley. The church today has five polychrome marble altars. The pictures above the altars are precious, especially the one above the Main Altar, painted by V. Italiani, a clear Venetian school, which represents the Assumption of the Virgin Mary, to whom is dedicated the church. The tables of the Via Crucis are also admirable, by A. F. Vanzo painter from Cavalese, painted between 1799 and 1819.
The square, situated in the heart of the village, is also one of the most large in the Valley. In the ancient times it used to be the place where the village council (called “Regola”) of Smarano, and the near villages of Coredo and Sfruz used to gather. It is faced by the impressive church and the bell tower.
Smarano preserves essentially the traditional aspect of rural centre regardless of the numerous restructuring works made in the most recent years and the demands of a tourism in constant evolution: it is a favourite place chosen by people who love relax and pleasing contact with the lovely and well preserved surrounding environment of mountains and woods.

By Car:
Exit “Mezzocorona-S.Michele A.A.” on A22 Highway.
Direction Mezzolombardo and Cles, until the village of Dermulo, then go to Coredo and finally to Smarano (25 km)

By Plane:
Verona is the nearest airport – 15 minutes by bus shuttle to the Central Station and one hour to Trento
Milano airports are about 300 km far: Linate http://www.milanolinate-airport.com/en/directions-and-parking and Malpensa http://www.milanomalpensa-airport.com/en/directions-and-parking
Comfortable trains are linking the near city of Trento to Verona / Milan (http://www.trenitalia.com/tcom-en).